Hummingbirds in the Bay Area

Fourteen species of Hummingbirds have been reported in the Bay Area, with the most commonly seen being the Anna’s Hummingbird and the Allen’s Hummingbird.

What is a Hummingbird?

Hummingbirds are native to the Americas and constitute the biological family Trochilidae. They are the smallest of birds, with most species measuring a mere 3-5 inches in length.

They are known as hummingbirds because of the humming sound their rapidly beating wings create. Hovering in mid-air at rapid wing-flapping rates, the smallest species have in excess of 80 beats per second! Of those species that have been measured in wind tunnels, their top speed exceeds an incredible 34 mph. Some species can dive at speeds in excess of 49 mph. 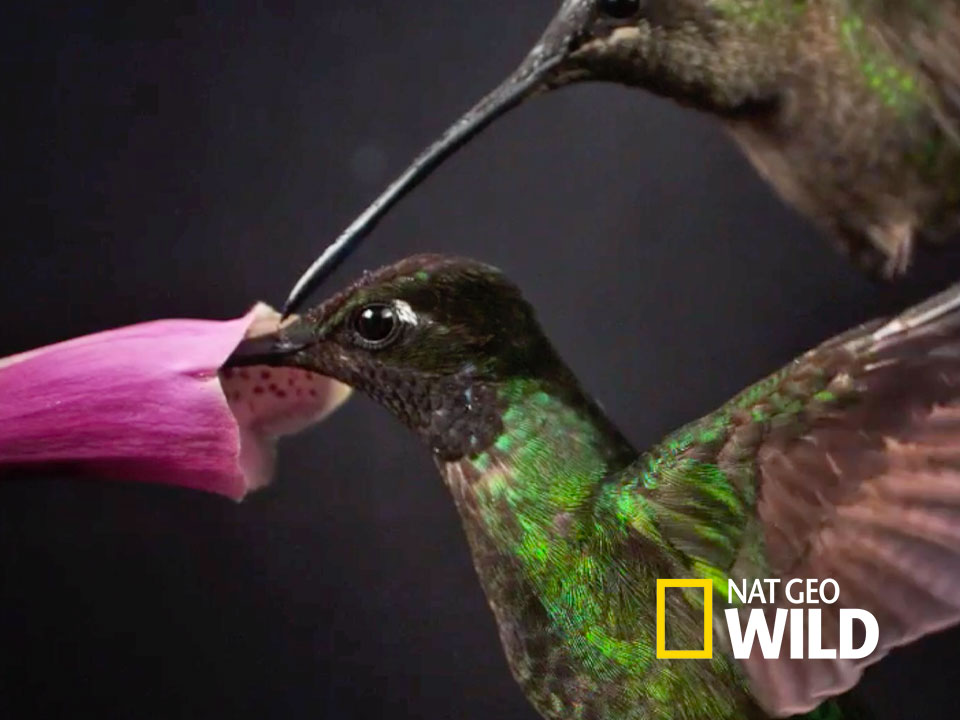 Watch this Nat Geo video of a Magnificent Hummingbird in slow motion.

Where to See Hummingbirds

There are two ways to see a hummingbird in the Bay Area. Create a pollinator garden to bring them to you or go out into the City in search of their favorite spots!

This article from the City’s SF Environment website lists several locations for catching a glimpse of these delicate avian beauties, including Sue Bierman Park and Washington Square Park. 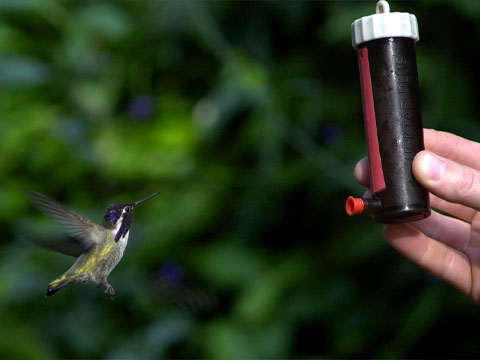 If you would like to attract Hummingbirds to your property, you might be surprised to learn they are savvy consumers! Commercial recipes do not appeal to them the way homemade recipes do. Here is a simple, sure-to-please recipe from the Smithsonian.

If you are looking to attract and support hummingbirds in your garden, consider using nectar-rich sustainable plants. This saves you time and energy on maintenance and it supports hummingbirds in performing a vital function for the native plants that depend on hummingbirds for pollination.

The California Native Plant Society has an in-depth article that provides a full range of options for using sustainable plants. Read the full article on their website. 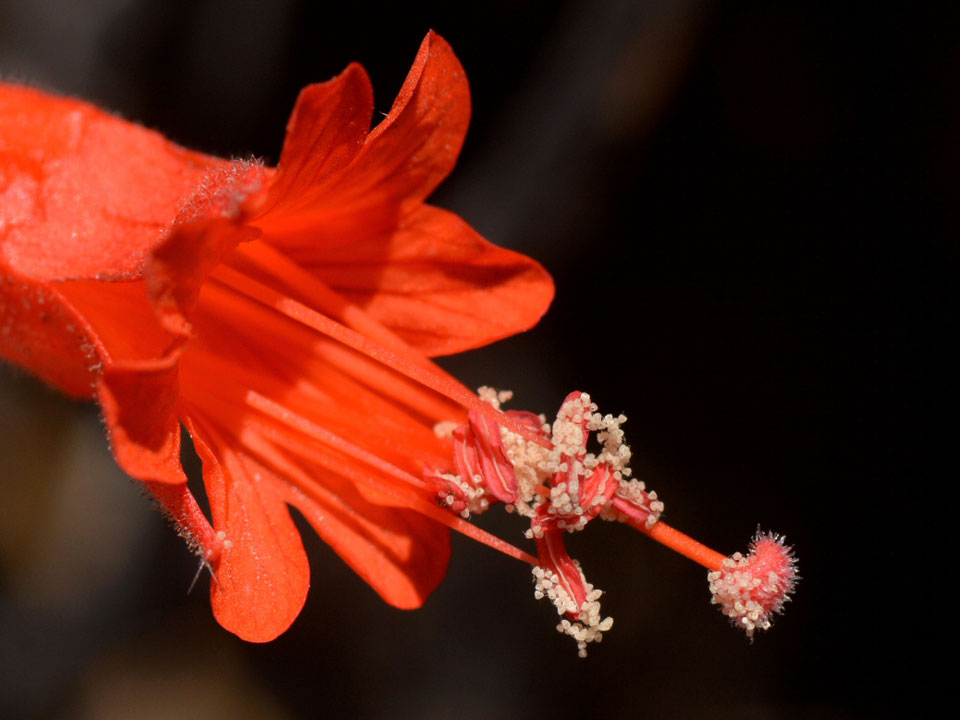 The San Francisco Botanical Garden is a known hangout for the Allen’s Hummingbird. A living museum within Golden Gate Park, it offers 55 acres of both landscaped gardens and open spaces, showcasing nearly 9,000 different kinds of plants from around the world. To increase your chances of seeing an Allen’s Hummingbird when you visit the Garden, use the California Native Plant Society’s article on feeder plants for hummingbirds to identify the best plants to watch, then use the plant finder on the San Francisco Botanical Garden’s website to locate them.

Five species of Hummingbirds are native or year round residents in the Bay Area. 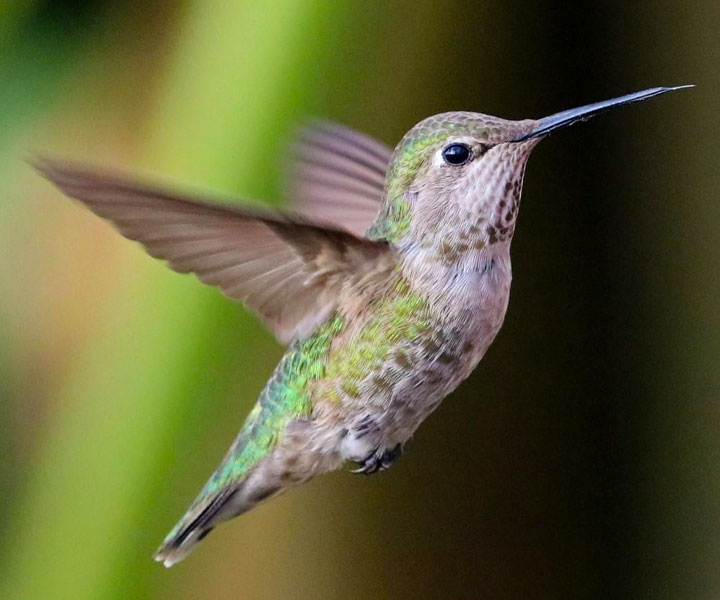 Anna’s Hummingbird (Calypte anna) a medium-sized hummingbird native to the west coast of North America, was named after Anna Masséna, Duchess of Rivoli. In the early 20th century, Anna’s hummingbirds bred only in northern Baja California and southern California. The transplanting of exotic ornamental plants in residential areas throughout the Pacific coast and inland deserts provided expanded nectar and nesting sites, allowing the species to expand its breeding range. SOURCE: Wikipedia

It is the largest and most common hummingbird found in California; and the only one that produces a song.

Interesting Fact Anna’s hummingbirds can shake their bodies 55 times per second to shed rain while in flight, or in dry weather, to remove pollen or dirt from feathers. Each twist lasts four-hundredths of a second and applies 34 times the force of gravity on the bird’s head. Source: NCBI Article 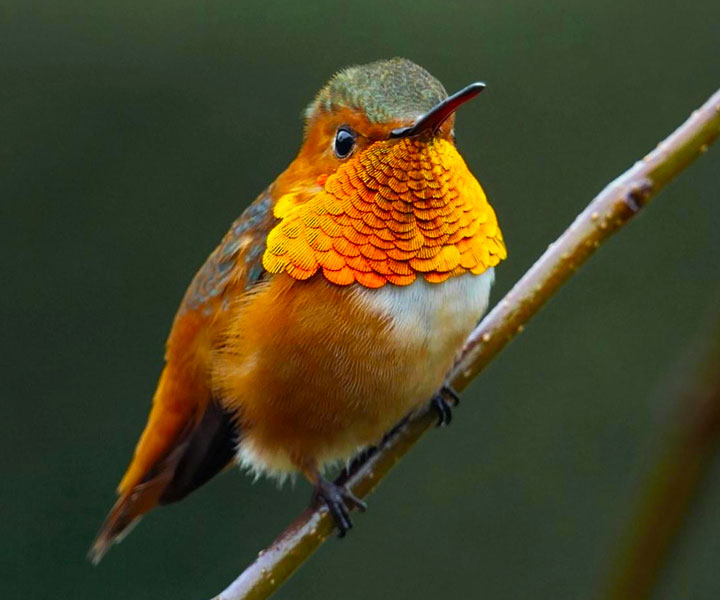 Allen’s hummingbird (Selasphorus sasin) is a small bird, with mature adults reaching only 3 to 3.5 in (76 to 89 mm) in length. The male has a green back and forehead, with rust-colored (rufous) flanks, rump, and tail. The male’s throat is an iridescent orange-red. The female and immature Allen’s hummingbirds are similarly colored, but lack the iridescent throat patch, instead having a series of speckles on their throats. Females are mostly green, featuring rufous color only on the tail, which also has white tips.

Immature Allen’s hummingbirds are so similar to the female rufous hummingbird, the two are almost indistinguishable in the field. SOURCE: Wikipedia

Interesting Fact Aggressive and territorial, male Allen’s hummingbirds will chase any other males from their territory, and have even been known to attack and rout predatory birds several times larger than themselves, such as kestrels and hawks. 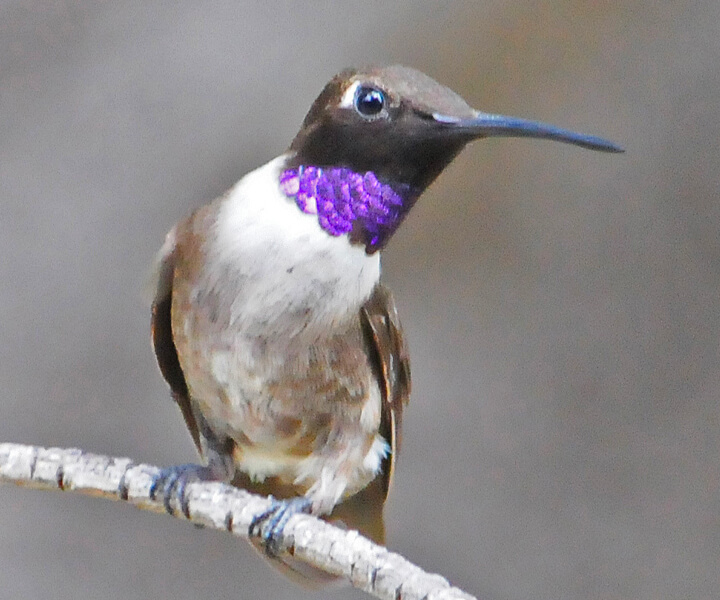 Black-chinned Hummingbirds (Archilochus alexandri) The black-chinned hummingbird is 8.25 cm (3.25 in) long. Adults are metallic green above and white below with green flanks. Their bill is long, straight and very slender. The adult male has a black face and chin, a glossy purple throat band – which is difficult to see – and a dark forked tail. The female has a dark rounded tail with white tips and no throat patch; they are similar to female ruby-throated hummingbirds. Juvenile plumage is similar to that of adult females, but with buff margins on the dorsal feathers. Juvenile males may also possess purple feathers on their throats.

Interesting Fact Young are born almost featherless, but obtain a complete set of feathers within three weeks of hatching. Juveniles can begin replacing their plumage in November, and acquire their first basic plumage between April and May. Molts will then occur annually, taking 7–8 months at the population level. SOURCE: Wikipedia 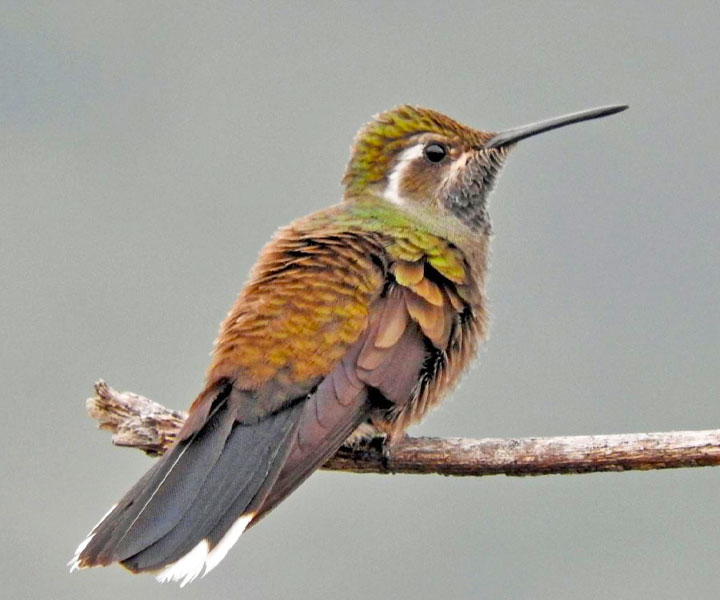 Blue-throated Hummingbirds (Lampornis clemenciae) are a fairly large hummingbird, reaching 4.5 to 4.9 inches in length. The Blue-throated Hummingbird is dull green on the top of its body, fading to medium gray on its belly. It has a noticeable white stripe behind its eye and a narrower stripe extending backward from the corner of its bill, bordering a blackish cheek patch. Its tail feathers are iridescent blue-black with broad white tips on the outer two to three pairs.

The species gets its name from the adult male’s iridescent blue throat patch (gorget), but the female lacks this, having a plain gray throat.

Interesting Fact The Blue-throated hummingbird uses ultrasonic vibrations which are not for communication, but possibly serve to flush out and disorient its insect prey. 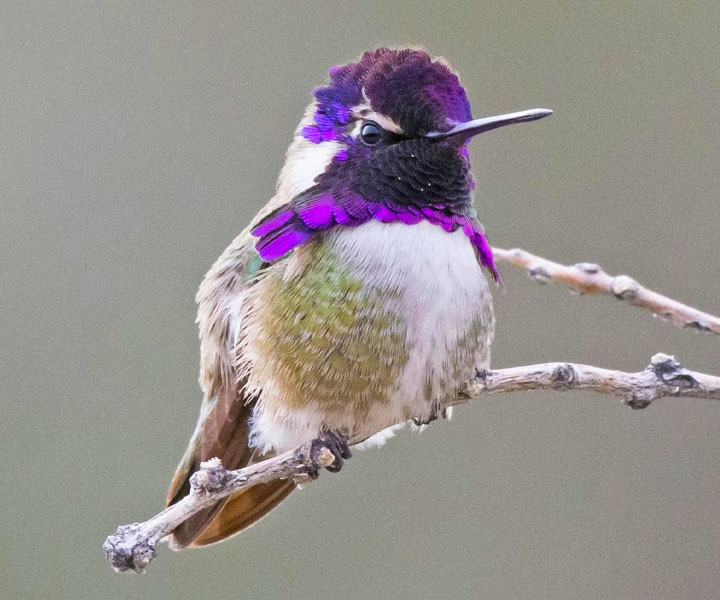 Costa’s Hummingbirds (Calypte costae) are very small, mature adults growing to only 3–3.5 inches in length. The male Costa’s most distinguishing feature is its vibrant purple cap and throat with the throat feathers flaring out and back behind its head. The female Costa’s hummingbird is not as distinct as the male, having grayish-green above with a white underbelly.

Females lay just two eggs, which are white in color, which she will incubate for 15 to 18 days before the young hatch. The young Costa’s hummingbirds leave the nest after 20 to 23 days.

Interesting Fact The male Costa’s hummingbird’s courtship display is a spirited series of swoops and arcing dives, carefully utilizing a proper angle to the sun to show off his violet plumage to impress prospective mates.

Migrating hummingbirds might arrive as early as January or February and usually leave in October. 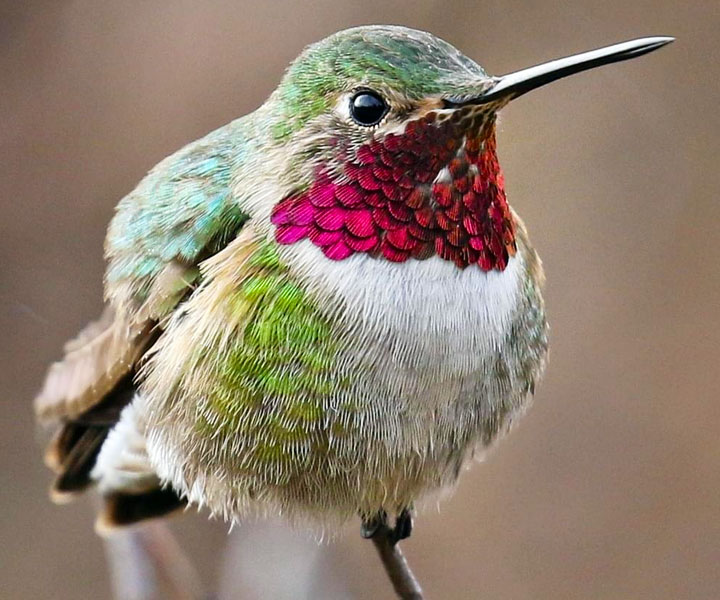 The Broad-tailed Hummingbird is seen in the understory or under tree canopies of pine and oak woodland. It forages in open areas with flowers or in grasslands among trees and shrubs. Its wintering regions are from Guatemala to Mexico, summering in western United States and Western Canada. SOURCE: Wikipedia 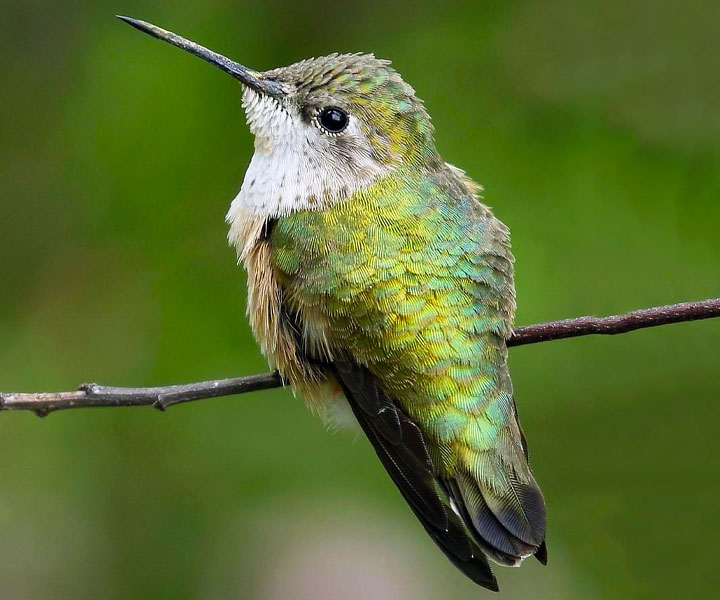 This is the smallest breeding bird found in Canada and the United States. The only smaller species ever found in the U.S. is the bumblebee hummingbird, an accidental vagrant from Mexico. They nest in western North America from southern British Columbia and Alberta south to Colorado and southern California. During spring and summer, they move, mainly through Arizona and New Mexico and northern Mexico, to winter in southwestern Mexico as well as in Guatemala and Belize. SOURCE: Wikipedia 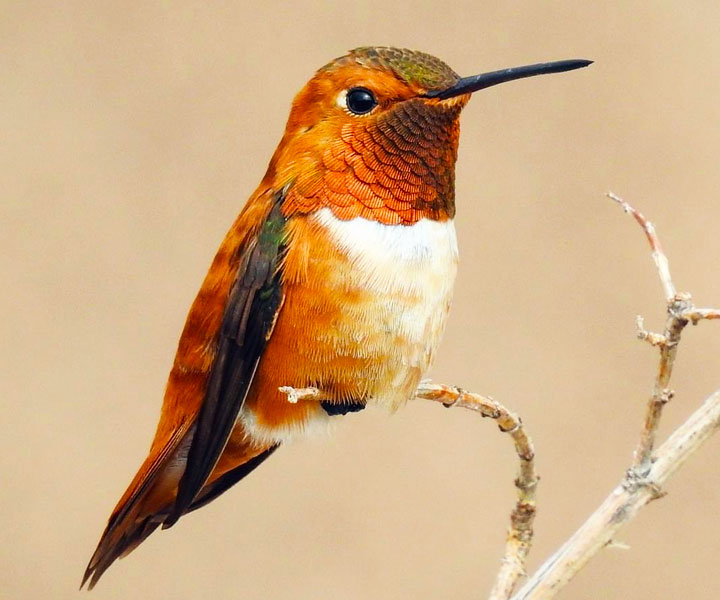 The Rufous Hummingbird is known for its extraordinary flight skills, flying 2,000 miles during its migratory transits. It is also known for being one of the feistiest hummingbirds in North America, and are relentless attackers at flowers and feeders. Rufous Hummingbirds are wide-ranging, and breed farther north than any other hummingbird. Look for them in spring in California.

Bay Area sightings of these six species of Hummingbirds are rare, but they do make their way up the California coast from their native habitats in Mexico and Texas, some reaching as far as British Columbia. 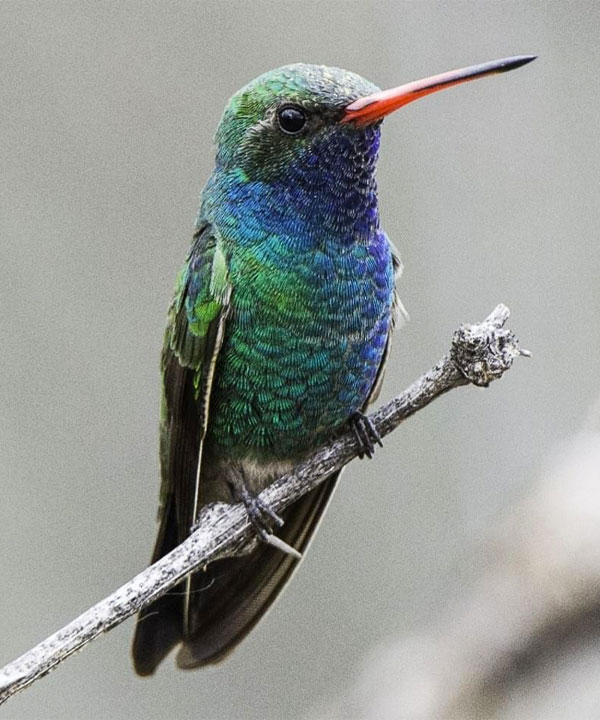 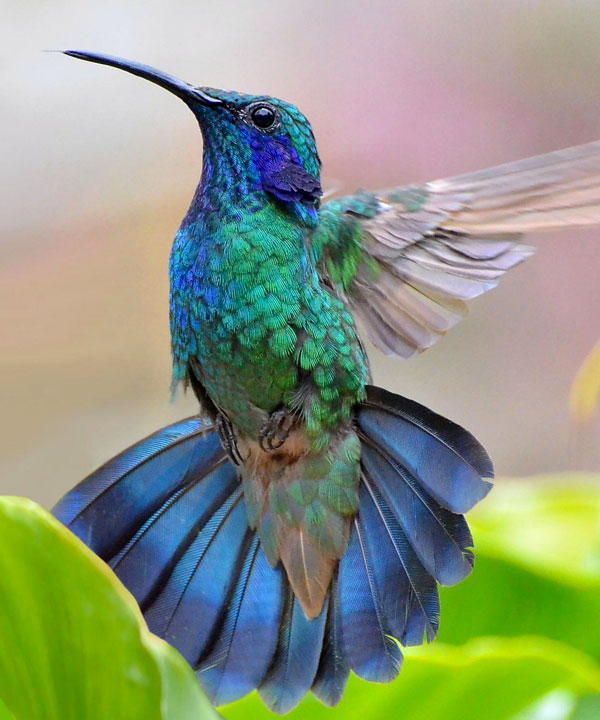 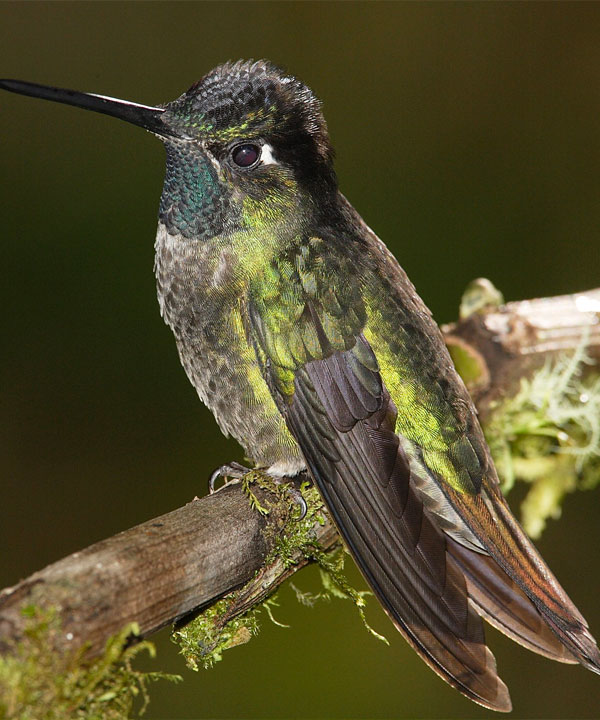 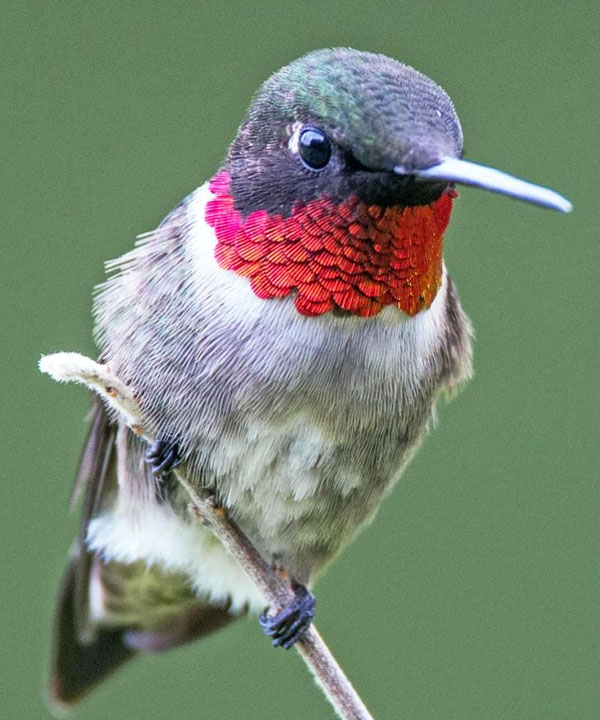 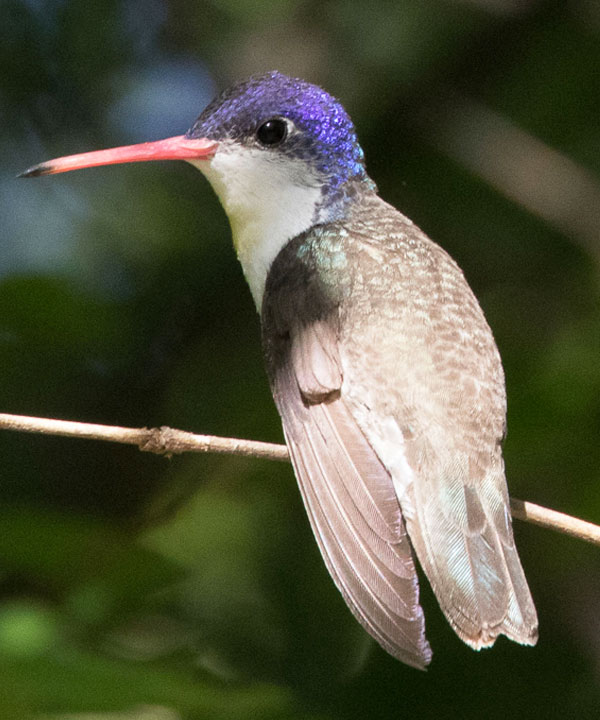 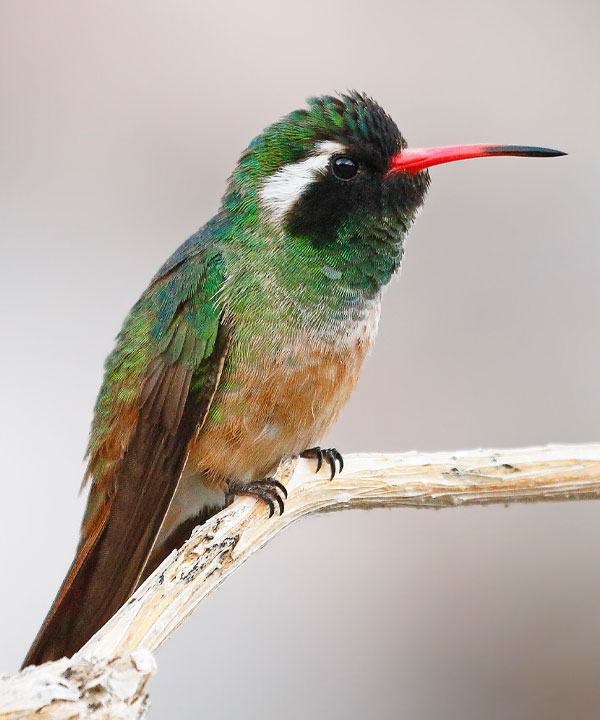